If you're newly expecting and suddenly seeing the word "layette" everywhere, you probably know it's time to start exploring the best baby layettes. However, if you're like many people, you may secretly be wondering "what the heck is a layette???".

Pregnancy introduces a whole new language with words most of us have never heard or used before. Indeed, the transition into parent-mode can feel like we've moved to a new country where we don't speak the language.

Layette is an old-fashioned sounding word. According to Google's Ngram Viewer, the word's usage peaked in the 1930s and 1940s and has recently come into common usage again.

So what exactly is a layette, and where does the word come from?

How We Reviewed for the Best Baby Layettes

When looking for the best baby layettes, we looked at customer reviews, quality, and the materials from which the clothing was made.

Also, while having a lot of good reviews is great, we have included a couple of layettes that don't have tons of reviews. They were chosen for our list of best baby layettes because of the special quality of the materials used, and well...the cuteness factor.

Although you can find the best baby layettes in most department stores, many people enjoy the convenience and variety of online shopping. For this reason, we crawled the web and found these adorable (and oh so practical) layettes. 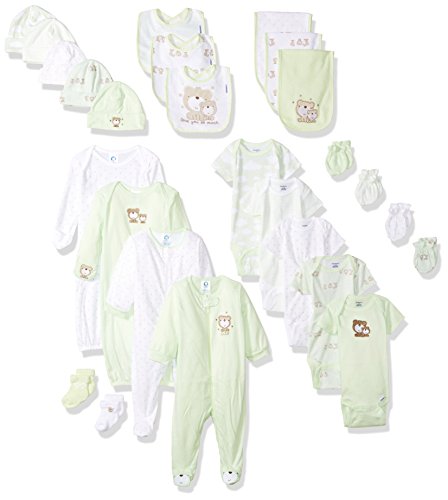 When it comes to brands for baby, few companies have inspired more brand loyalty than Gerber.

They have outdone themselves with the 26-Piece Essentials Gift Set. It resembles the traditional best baby layettes perhaps more than any of the other layettes we found online.

We love that the clothing is made of 100 percent cotton. The bibs and burp cloths are a cotton and polyester blend.

This Gerber layette is one of the most popular layettes on Amazon. 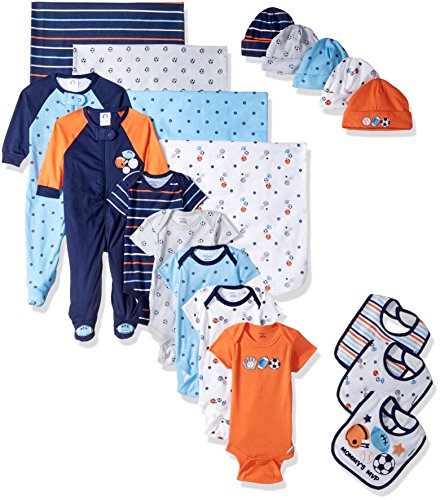 It comes in bright, bold shades of blue, yellow, and orange, and is available in five different color schemes.

In this layette, there are two long-sleeved bodysuits, five onesies, four receiving blankets, three bibs, and five knit caps. The bodysuits, caps, onesies, and blankets are made of 100 percent cotton, while the bibs are a cotton and polyester blend. 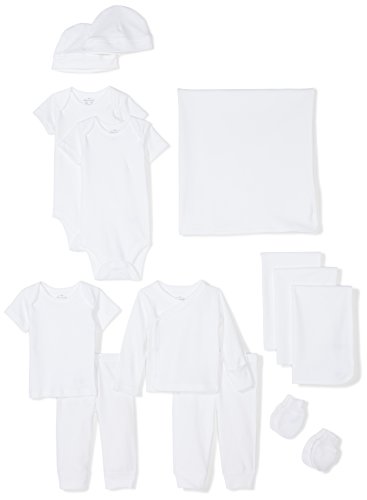 The Moon and Back layette is made from super soft organic cotton and is certified by the Global Organic Textile Standard (GOTS).

This layette is available in three different size/age groups. 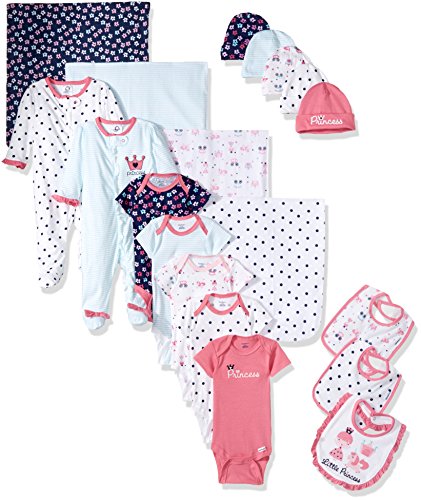 The Gerber Baby Girls' layette is just as adorable as the one they've made for baby boys.

This is even better:

You can choose from five different vibrant color schemes that include cute pastels and even some navy blue shades. 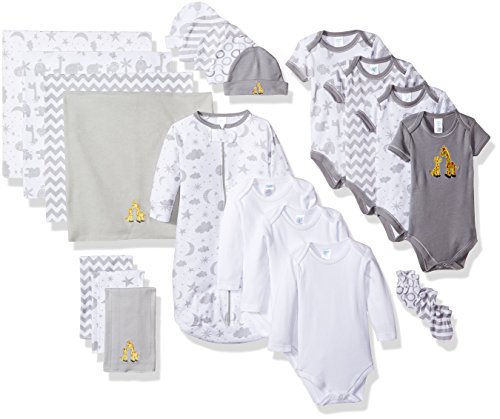 As one of the most popular layettes on Amazon, the Spasik layette has earned its props.

You can choose between three different patterns and colors, including polka dots, stripes and solids, and a dinosaur pattern. 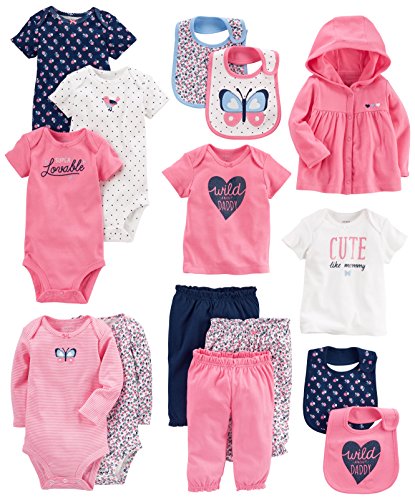 When it comes to brands that cater to babies, Carter's is right up there with Gerber when it comes to reputation and quality. As expected, they don't disappoint with this baby girl's layette.

Carter's set for baby girls comes in two different colors and includes sizes up to 24 months. 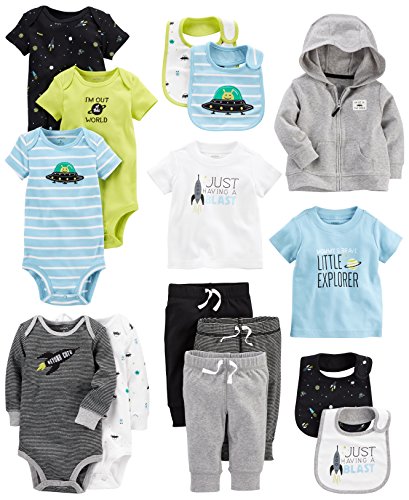 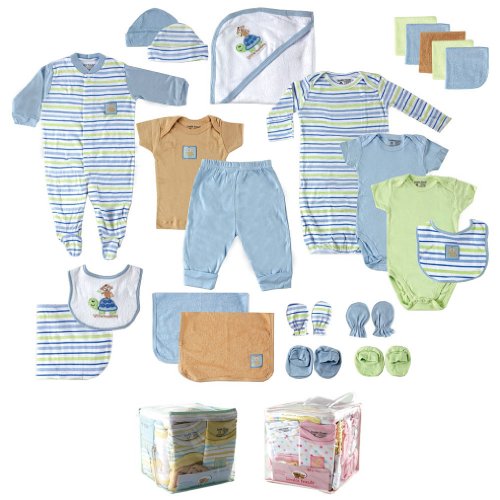 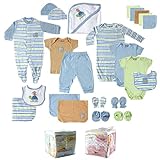 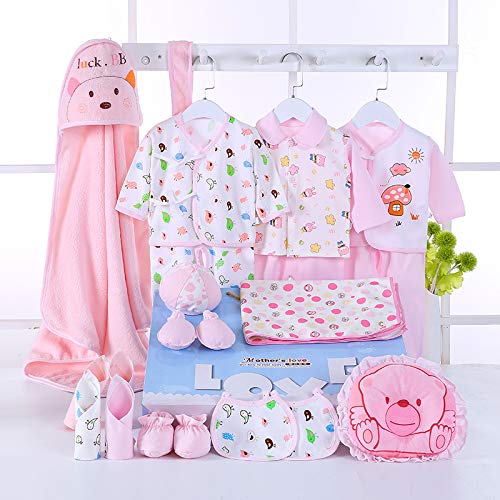 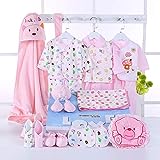 We couldn't do a list of the best baby layettes and not include one that just screams tradition.

This handmade crocheted layette will be a keepsake that can be passed down through generations. It comes in yellow, but the maker has other colors available in her listings. Also, you can contact her with specific requests.

With this layette, you receive a dress, hat, diaper cover, and booties with yellow satin ribbons and satin ribbon flowers.

While it has no Amazon reviews yet, we couldn't resist including it in our list to give you ideas. Check on Etsy for more variety.

What Is a Layette?

In short, a layette is your baby's first wardrobe.

Traditionally, the best baby layettes consisted of everything babies needed for the first year or so of their lives.

However, it's come to mean a basic wardrobe and some necessities like blankets and outerwear.

Where did the word layette come from?

The word layette comes from French and the first known usage in its current form was in 1839. It translates loosely to "chest of drawers" in English.

A deeper dig on the etymology of the word "layette" shows the word coming from the Middle French word for "linen" and Middle Dutch (laeye), which is related to the verb load, or lade.

So a baby's "layette" traditionally actually referred to the box in which the newborn's wardrobe comes, not so much the clothing itself. However, that has definitely changed to mean the baby's actual wardrobe.

What a layette is NOT (traditionally)

If you shop online, you'll see tons of little outfits called layettes. However, it's not specifically a layette unless it includes a goodly portion of a baby's wardrobe.

Therefore, an outfit consisting of a pair of pants, shirt, hat, and socks isn't really a layette, regardless of what the advertisers want to call it.

But this isn't exactly new. In the 1920s, expectant mothers and their friends and family often knitted a matching outfit and called it a layette. However, their usage of the word was entirely appropriate because the set would typically include not only an outfit, but a matching blanket, hat, sweater, and booties.

Also, you'll see the baby's section of some department stores referred to as the "layette." Though technically not accurate, keep in mind that language is fluid and the meanings of words change over time.

History of the layette

Traditionally, the layette was also called the "baby linen box." Making these tiny garments and goods by hand was considered a highly appropriate (and completely necessary) activity for ladies, including ladies of the gentry and their daughters and maids.

Here's what would have been included in a "baby linen box" in the Victorian and Edwardian eras.

Note that the best baby layettes also included some items for the mother, including:

Isn't all of that terribly charming?

And here's the best part:

A baby's needs haven't changed much over the centuries, have they? Perhaps our baby girls don't need petticoats, but overall, that list looks pretty darn practical.

We've gone over what Queen Victoria likely had in her babies' layettes, but what do we need in the modern era? Well, as we mentioned, a baby's needs haven't changed overmuch.

Here's a good checklist of what most families will look for in the best baby layettes.

There's no hard and fast rule that you have to have a layette that looks exactly like that list. Every family has different needs, so adjust your layette accordingly.

Now, when you're shopping online for a layette, you likely will not find all of that in one big bundle or "baby linen box." However, if you're looking for a special gift for a mom-to-be, you can find a good little starter layette and add separates to it.

Why Layettes Are Still Practical and More Awesome than Ever

In modern times when wardrobe separates rule, do we really need a layette?

Unlike previous generations, most 21st Century families are two-income families, with both parents working outside the home. Consequently, it's more urgent than ever that moms and dads be able to quickly and efficiently dress baby for leaving every morning.

Bonus points if they can get them out of the house in matching clothing.

You're going to have a layette even if you aren't yet calling it a layette. Your baby's new wardrobe and all of the supplies you've bought are your baby's layette, even if they're not all matching.

Where to Buy the Best Baby Layettes

You can buy the best baby layettes in department stores and online. It really just depends what you're looking for.

Looking for a gift? You can check out boxed sets on Amazon or go for something handmade on Etsy.

You can also pull together a lot of different separates and make a custom layette.

Our Favorites: The Best of the Best Baby Layettes

Is it really possible to choose from among the best baby layettes? Indeed, the sheer variety that's available makes it uniquely challenging. Also, it will depend largely on your baby's needs. But whichever one you choose, above all, take the time to enjoy your baby and this special time with your family.

Books for Expecting Parents That Transcend the Stereotypes

What to Expect When You’re Expecting

Best Video Monitors for Keeping an Eye on Your Infant